The first test of Pakistan’s tour of England could not have gotten off to a better start. They won an important toss, chose to bat, and then managed to end the day at 139 for 2. There was some time lost in the match due to the unexpected rain but Pakistan would definitely be the happier side at the close of play.

Shaan Masood and Babar Azam are at the crease, the latter looking like at absolute ease in the centre. Masood got a few reprieves but he cannot be blamed for them.

England’s bowling was good in patches and poor at other times. They beat the bat on many occasions but eventually got tired and presented some easy scoring opportunities to the Pakistanis. Perhaps the biggest concern for England wills the amount of turn that was visible on the first day of cricket.

The second day is going to be all about Pakistan trying to assert its dominance and England trying to claw back. 49 over’s have been bowled and so England cannot let their new-ball bowlers bowl very long spells. Dominic Bess and maybe even Joe Root have a role to play in keeping the Pakistani batsmen quiet before the new ball becomes due.

This is also the time when Pakistan will look to score some runs before the new ball becomes available.

Chris Woakes looked like the most impressive bowler on Day1. He and James Anderson could be the most dangerous bowlers on Day2 of the test match. For Pakistan, Babar Azam has to bat as long as possible. He has been guilty of just losing a bit of patience in the past after he gets past 50 and so that is something to watch out for.

Asad Shafiq, Mohammad Rizwan, and Asad Shafiq form a decent middle-order but one that could crumble against some disciplined bowling. The match is very evenly poised at this stage with maybe Pakistan having a slight upper hand.

Pakistan may have added Shadab Khan to its lineup for this match to give it some more depth, however, we still believe the lower-order is weak. The side can easily 200-4 to 270 all-out. Give yourself some margin and take the 60% return on your bet.

This bet is worth being a banker for anyone that is looking to bet multiples.

The resumption of play is when batsmen are at their most vulnerable. Shan Masood received two clear chances yesterday and had plenty of near misses as well. That being said, both the batsmen at the crease are the best ones for Pakistan at the moment.

This is a bit of risk but we think it could pay off. English conditions, anxious batsmen, and a world-class bowling attack all combine to give you a very good chance of winning this bet.

Babar Azam is an attacking batsman by nature. He does not mind taking the bowlers on at any time of the day. If he remains there till the 55th over, which we are hoping he will, then this total is going to be surpassed pretty easily. One or two boundaries are all that is going to take for you to win this bet.

The world is currently going through a situation that none of us have seen in our lifetimes. This has meant some extraordinary measures for the resumption of cricket and that brings with it some unique challenges. England is going to be playing an ODI match against Ireland on the 3rd of August and then starting the first Test against Pakistan on the 4th.

Thankfully, the set of players involved in both matches are completely different and so it should not matter too much.

England vs Pakistan is always an intriguing contest. Pakistan is one of the few sides that has been able to find success in England every time it is there. In fact, Pakistan has not lost a series against England in the previous ten years irrespective of the venue.

Can Pakistan put pressure on a wobbly England side once more? Will England be able to expose the chinks in the Pakistani armor as well as any rust that might have set in?

Fantastic bowlers, exciting batsmen, and some flawed sides make this an intriguing contest.

England vs Pakistan 1st Test 2020 is going to be played at the Emirates Old Trafford, Manchester starting on the 5th of August 2020.

England finished the three-test series against the West Indies very strong but we don’t think that result was ever in question. In fact, a 2-1 result would have left England a bit disappointed.

They now have a much tougher assignment against Pakistan. For one thing, the English top-order is far from settled and has been underperforming for a time now.

It looks like Dominic Sibley and Rory Burns are sure to open the batting for England in the first match. At number three, though, we could see Zak Crawley or Joe Root. Ben Stokes played as a pure batsman in the last test against the West Indies. If he is fit to bowl, England may not need to play the extra bowler and can bolster its batting, thus making way for Crawley.

This is something we will find out on the morning of the test.

None of England’s batsmen seem particularly well-settled to us at the moment, except for maybe Ben Stokes, and that is a big problem going up against Pakistan.

The bowling is where England can equalize some things.

Stuart Broad has done to ensure his name is the first one on the sheet for this match. We think Jofra Archer will be picked for his extra pace and Anderson should get the nod for the third seamer. Will England play Woakes in place for either Archer or Anderson? It’s certainly possible and the right move would be to drop Anderson.

The most likely thing, though, is going to be playing with the same team as the last test against West Indies and so all four-seamers will play alongside Bess as the spinner.

England is the most vulnerable we have seen in a long time.

No cricket for a long time can be difficult to overcome and even though Pakistan has been in England for over a month now, that lack of cricket is the biggest challenge facing it. On paper, this Pakistan team can definitely match England in every aspect of the game.

The bowling is going to be led by Shaheen Afridi with quality bowlers like Naseem Shah, Mohammad Abbas, and Yasir Shah in there as well. We don’t think Sohail Khan is going to get the nod for this match even though he has been in very good form during the warm-ups.

Mohammad Abbas has the kind of bowling to take advantage of any swing on offer but the Pakistani management will be hoping he can up his pace just a little bit. We think Shaheen Afridi is going to be the bowler to watch out for in this series.

He has that natural left-arm angle as well as the ability to swing the ball both ways at pace. He will test the English batsmen like no one else.

Yasir Shah and maybe Shadab Khan could also play to exploit any spin that the pitch offers.

If the Pakistani batting can get the runs, they certainly have the bowling to pick up 20 wickets.

So who is going to get the runs then? The Pakistani batting is young and a bit untested in our opinion. Babar Azam is the obvious superstar here. Considered as one of the best batsmen in the world, Azam has taken his game to a whole new level in recent times. His contest against Anderson and Broad is going to be fascinating.

Apart from him, though, we expect to see Azhar Ali, Shan Masood, Imam ul Haq, Asad Shafiq, and Mohammad Rizwan in the lineup to face England.

Is this batting lineup good enough to get the runs needed? This is where the real challenge for Pakistan will lie.

The team that wins the toss is going to bat first. The West Indies did not make learn from its mistakes and chose to protect its batsmen but neither of these two teams is going to make that error again.

The weather forecast for the first test is very good. The first day could be a bit cloudy but the chances of rain are very low. We should have no trouble at all getting a result in this match. As far as the pitch goes, we saw a lot of spins when England played the West Indies. That could actually be a bit more pronounced in this match and make life tough for the English batsmen.

Batting first and getting a big total is going to be crucial. The conditions will become worse for batting with each inning and any significant first-inning lead could be decisive.

here Pakistan has an edge. Yasir Shah, Mohammad Abbas, and England's Stuart Broad are a must-have for every team we think. 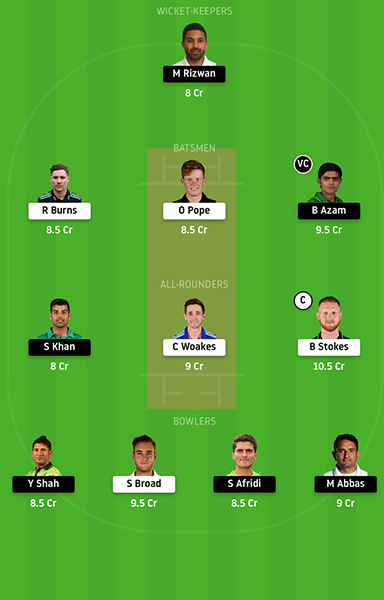 England is the favourite here for the bookmakers because of a number of reasons. It has played a lot of test cricket recently, much more than Pakistan, and so comes in better prepared. It has the home advantage and some of the best bowlers ever to have played the game.

We are not entirely convinced and think the market may be over-valuing England’s resources.

Pakistan has the bowling to expose England’s weaknesses and some talented batsmen in its lineup. A little bit of luck with the toss could give it the edge it needs.

We think it is worth betting on Pakistan in this match.

Stuart Broad and James Anderson will both fancy their chances against the Pakistani openers and so do we. Stuart broad will have a left-hander in his sights while James Anderson has had a lot of success against Pakistan in the past.

An early wicket is no inconceivable which could give England the higher opening partnership in this contest.

This is a risky bet but one that we like. Both England and Pakistan have a food bowling attack and a weak batting lineup. The pitch is also going to deteriorate pretty quickly as the match progresses. The first inning is where the runs have to be made and we think it is pretty possible that none of the players end up making a century in this match.

Drop your whatsapp number on this contact form . We will reply you shortly . We also provide you betting tips on whatsapp also.